This page contains a few tools related to TrackMasters.

The Track Inspector can open any TrackMasters track and display all of its metadata, aswell as the custom elements it contains and relies upon. This metadata most notably contains the scores, validity, version and author name. 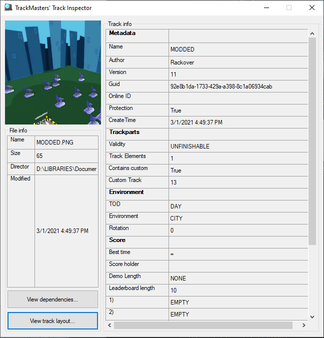 This tool is fairly basic and can only be used to view data, and cannot modify the opened track file.

To use the inspector, simply drag and drop any TrackMasters track inside the window. Only one file can be inspected at a time.

The layout viewer shows exactly what is written to the grid, for every layer (from ground to top, which is the third layer, for 4 layers in total). Every track element occupies exactly one cell, whatever size it is, and so the viewer will only show the cell they are written in as it is unaware of the size of each element. 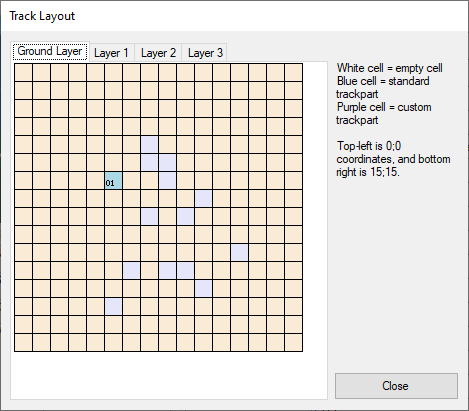 The number shown in each written (blue) cell corresponds to the ID of the track element.
Custom elements have a different ID system and instead reference the name of the custom trackpart they correspond to, and therefore aren't represented in this grid.

The custom elements of a track can be shown by clicking the "View dependencies..." button.

The latest Track Inspector is normally inluded with the game files, in the root game folder.
If you are missing the file for any reason however, you can download it here.

This tool converts tracks from Lego Stunt Rally (.trk format) to the TrackMasters format. It produces .PNG files with a sample image.

To use the converter, simply click "Select LSR track..." and browse to a valid .trk file.

As LSR contains more and different track elements than TM, a lot of elements cannot be translated and are removed when converting from one format to the other.

The LSR starting line is also much tinier, as it accounts for less players (4) than TM (8). Therefore, the converted tracks are marked as UNFINISHABLE by the converter so that a manual edition in TM is required before playing on them.

On some tracks however, if standard 1x1 straight roads surround the starting line, the converter may remove one of them to make way for the TM Starting Line and lay it at the correct place. The track will however still be marked as UNFINISHABLE until it is opened in the TM editor and saved.

Here is the Lego Stunt Rally - TrackMasters correspondance sheet used in the 1.38 version of TrackMasters. As new track parts get added to TrackMasters, this table might evolve.

The latest LSR Converter is normally inluded with the game files, in the root game folder.
If you are missing the file for any reason however, you can download it here.